How I make my ‘Millefiori Hexagon Bowls’

I’ve always wanted my ceramic pieces to have their form and decoration made at the same time – not having to ponder, once the piece is made, now, how shall I decorate it? During my three years at the Royal College of Art I worked out how to achieve this, inventing my own method, which I called ‘Millefiori’ (after some glass-blowing I was allowed to do in the Glass Department - where I learned how glass Millefiori paper-weights were constructed).

Inspired by Egyptian and Roman Murals, and ancient mosaic floors I choose natural oxide colours, colouring my white or buff earthenware clay with all the different oxide shades, rolling them into same-sized balls. (The colours don’t show in the raw clay, so each pile is clearly labelled). After constructing a strong plaster mould, I drape a sheet of dampened cheese-cloth inside the finished bowl-shape then place the small balls round and round almost up to the rim. (I found, annoyingly, that it took 3 times the amount of balls I had predicted, as they stacked down so neatly together). The mould then goes on a banding wheel and I wrap more cheese-cloth around a heavy stone kitchen pestle and begin to pound the balls together, working in a regular spiral from the bottom of the mould upwards.

To my delight, I discovered that the balls, when compressed tightly, not only produced thin strong walls, but turned into regular hexagons! Ah! Now I knew how bees made their honey-combs! Using a heavy pestle means that the pressure on the clay is quite strong. (Clay molecules are themselves stacked horizontally, so downward pounding presses them hard onto the mould-walls). As they are flattened, they slide up the mould-side. I finish a very neat rim by tucking the excess damp cheese-cloth back over it, pressing hard. Then the piece is covered with polythene and left overnight.

The following day, the pot is dry enough to lift from the mould, by holding the excess cheese-cloth used to fashion the rim.

Before I discovered cheese-cloth, I used to find that many pieces broke when I prised out the bowl. I tried soft soap, ‘sump oil’, olive oil, talc – all to no effect - and it wasn’t until a fellow student went to buy the cheapest plain cheese-cloth to hang behind her pots in order to photograph them – that I had a eureka moment - and bought a complete roll. From then on, I’ve never broken a Millefiori Bowl getting it from the mould. The dampened cheese-cloth laid in first always does the trick.

I leave the bowl to dry very slowly inside polythene until leather-hard, then scrape down the outside with a fine metal kidney on the banding-wheel, whilst holding the inside steady with the other hand. This reveals a very clean, clear patterning. I leave it well-wrapped for another night, before scraping the inside of the bowl. Both the pressure of the outside and inside fuses the clay molecules hard together, so that the finished piece is both strong and light.

The bowl is left to dry very slowly inside loose polythene, then bisque-fired slowly up to 1100 °, and finally given a soft matt transparent glaze for a satiny finish. 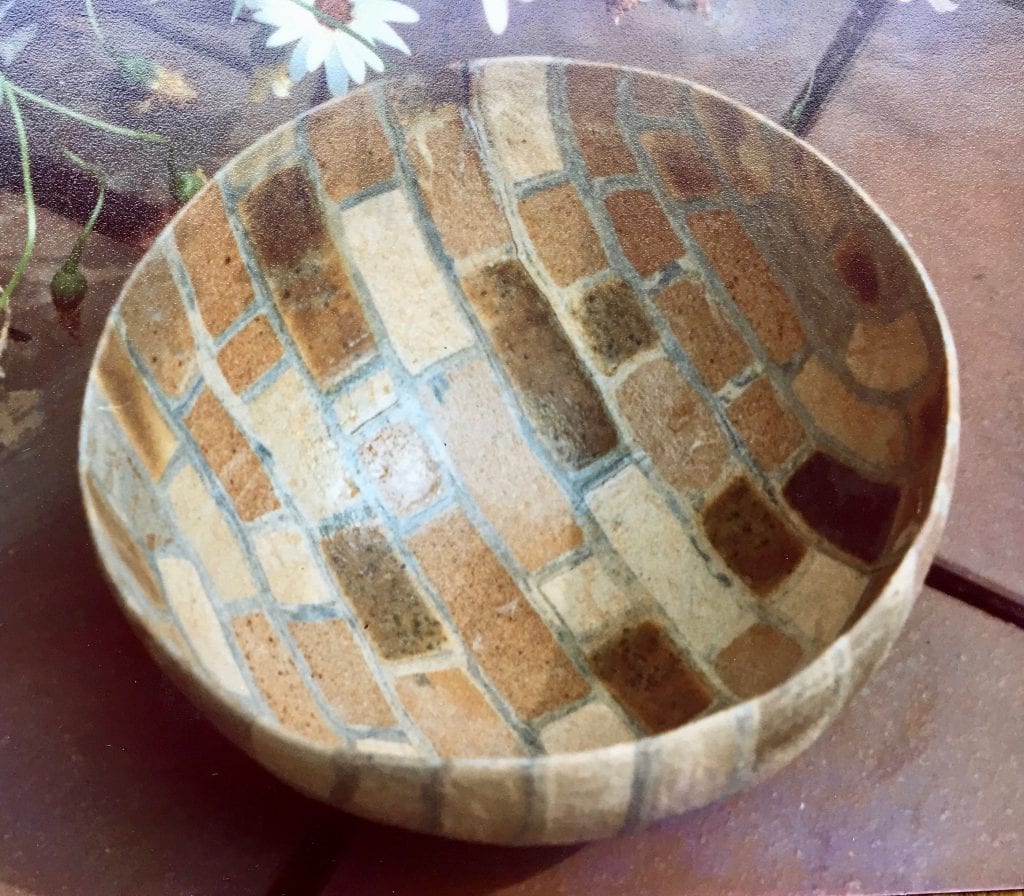 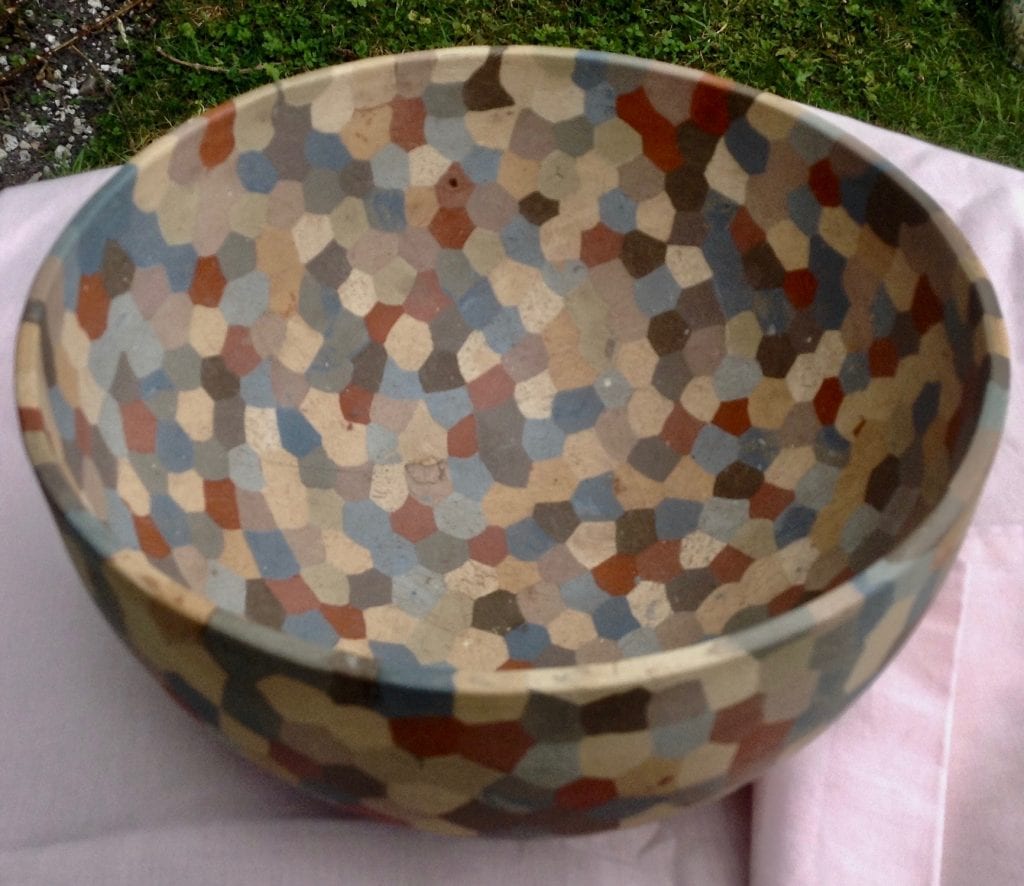 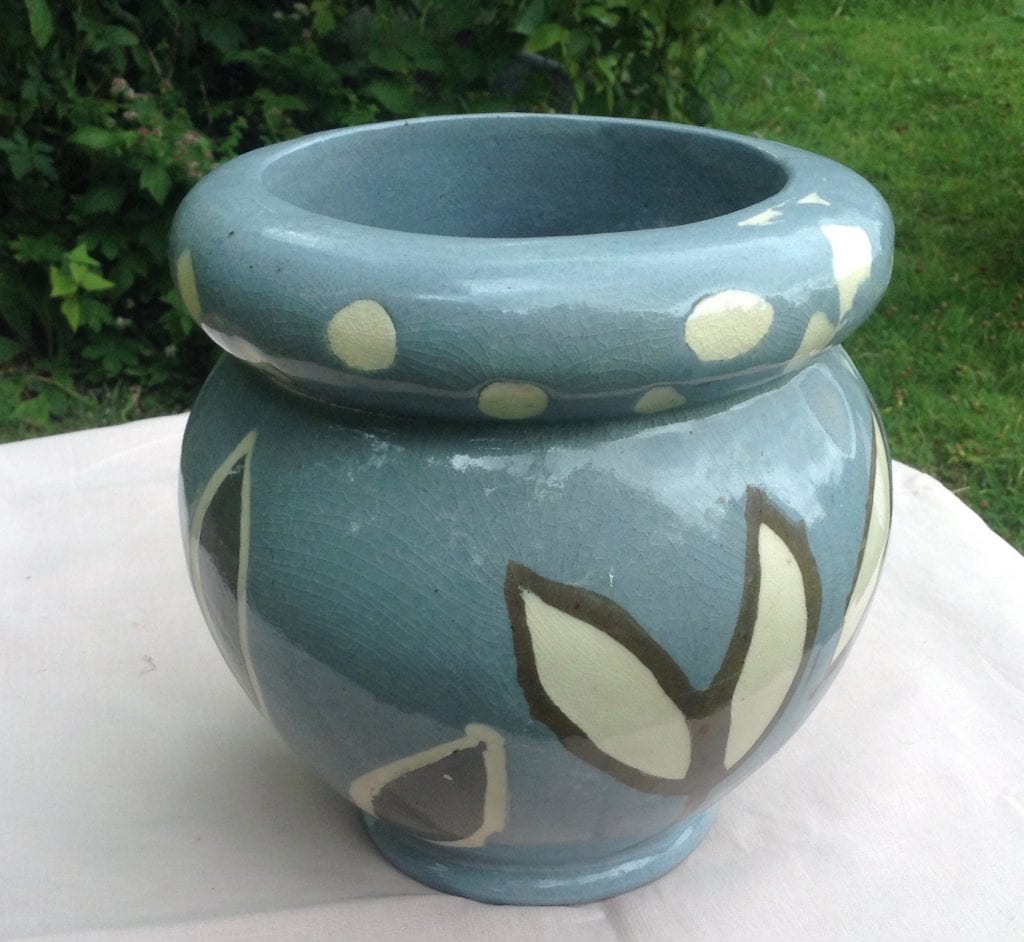 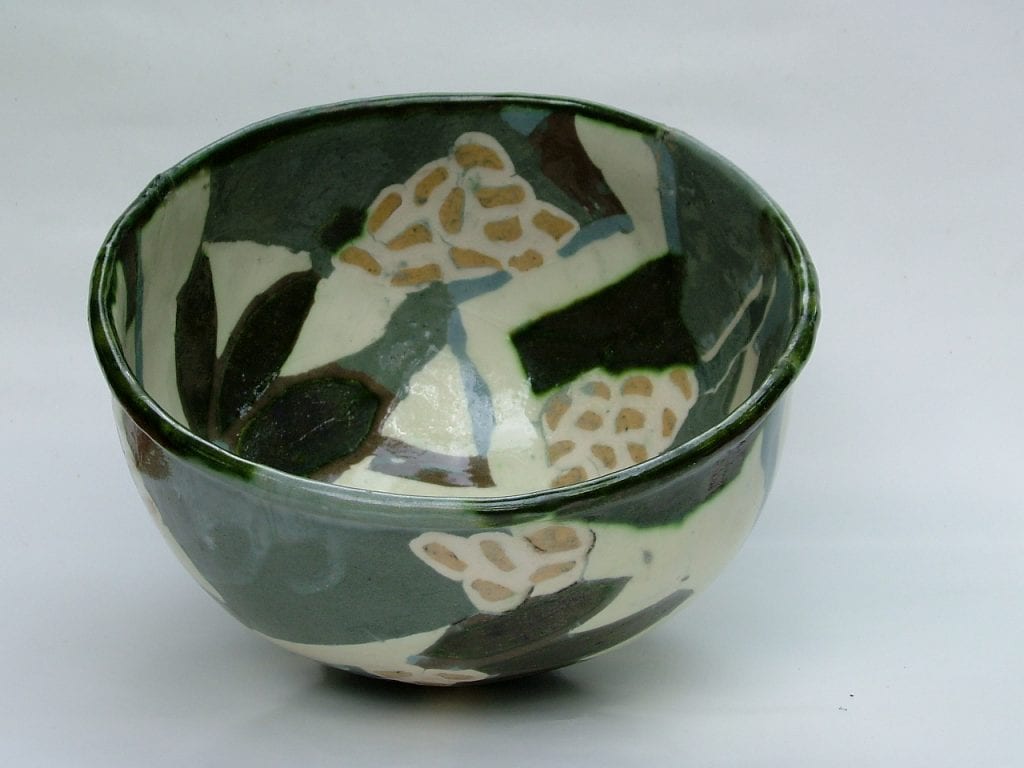 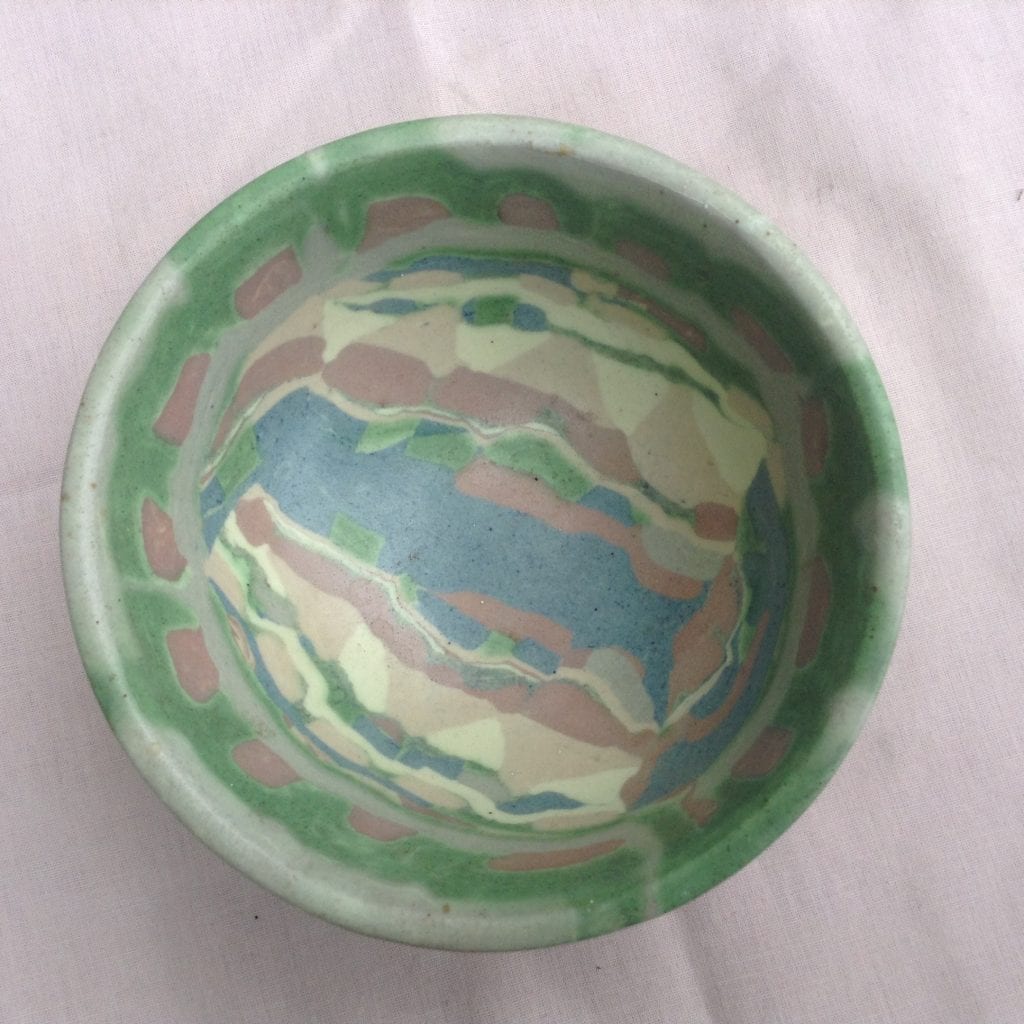 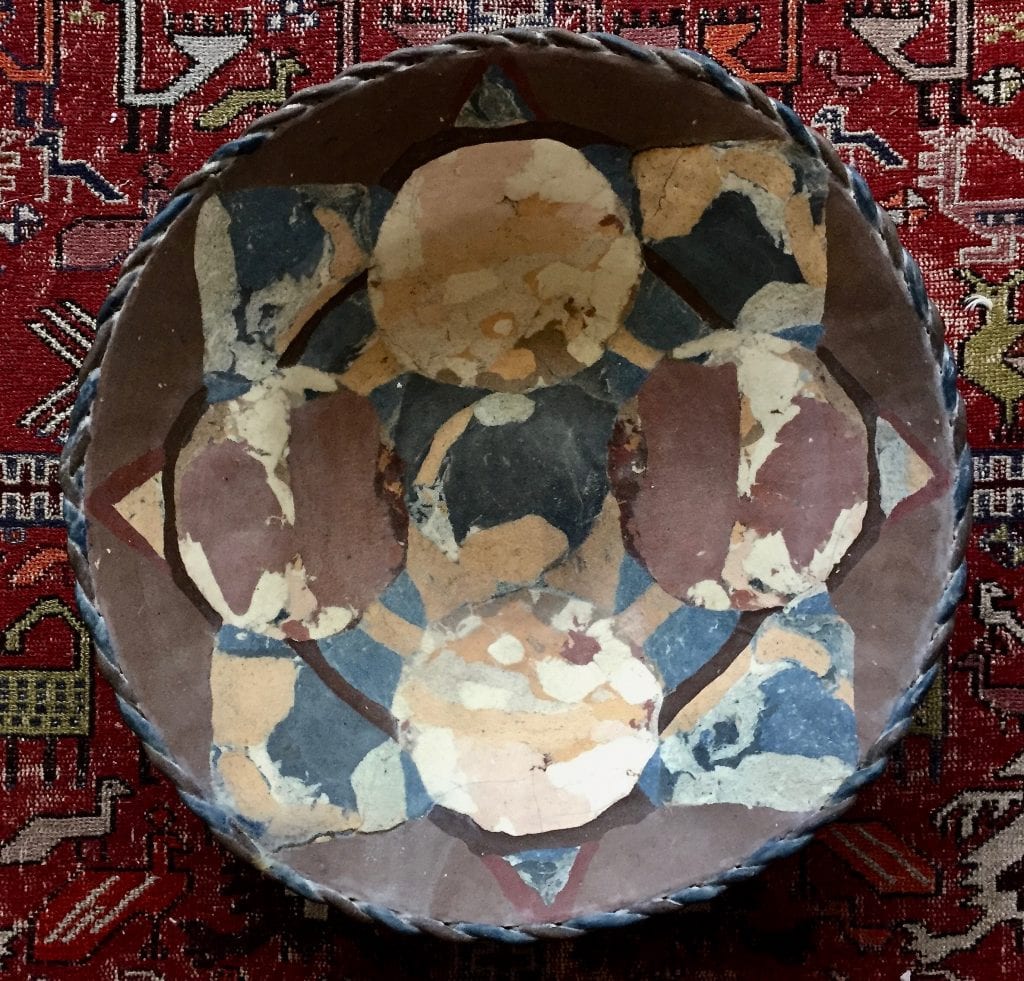 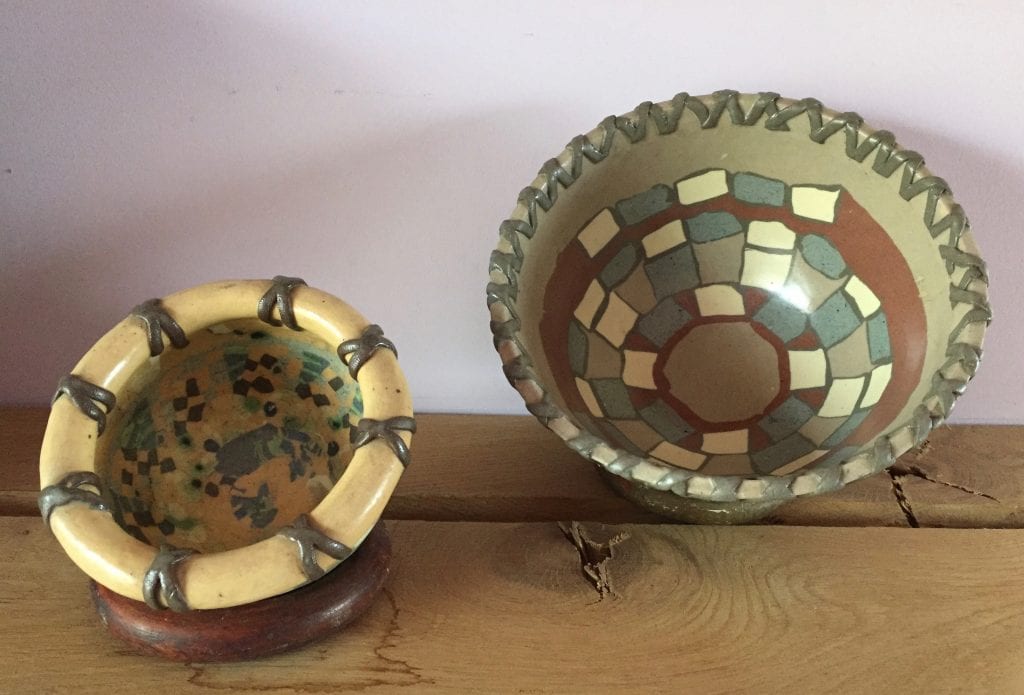 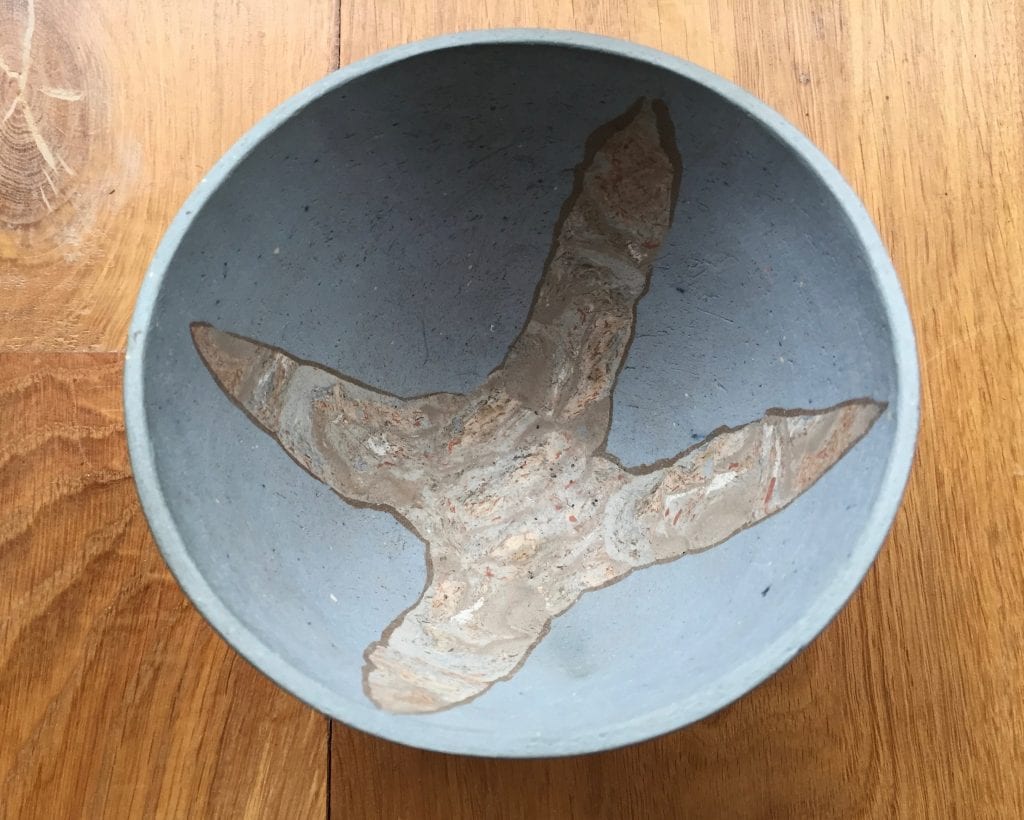 Out of This World Pot 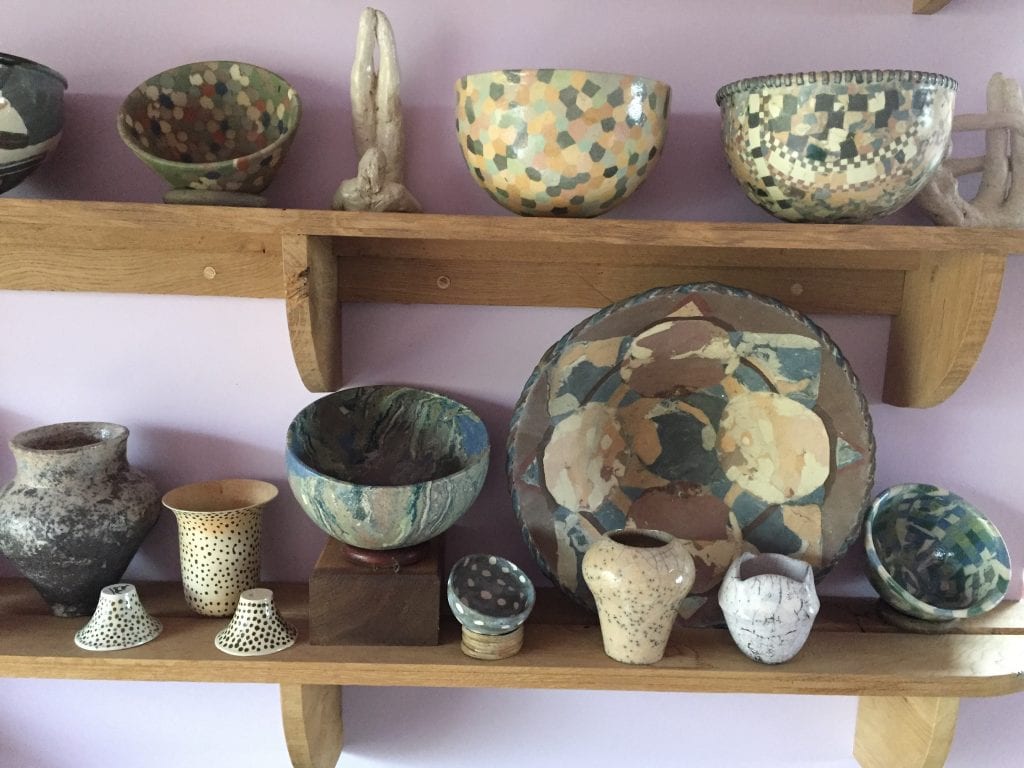 My Ceramics in my Long Gallery 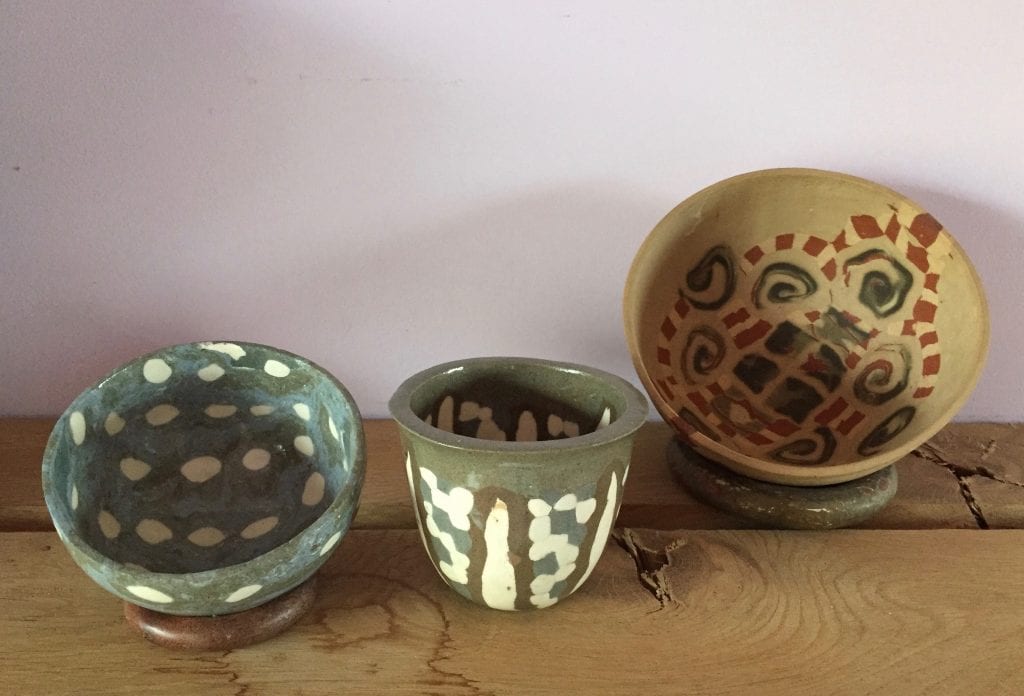 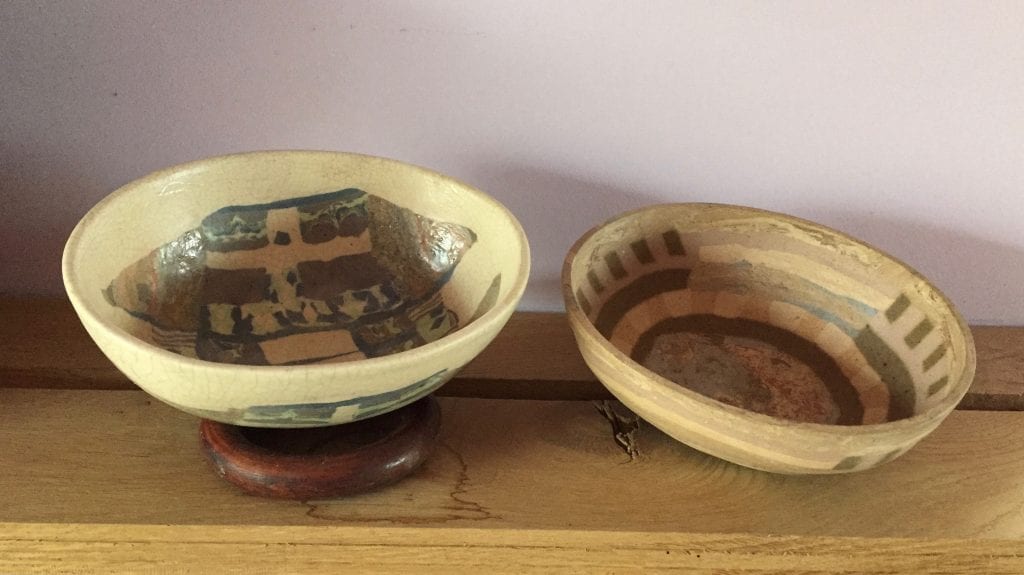 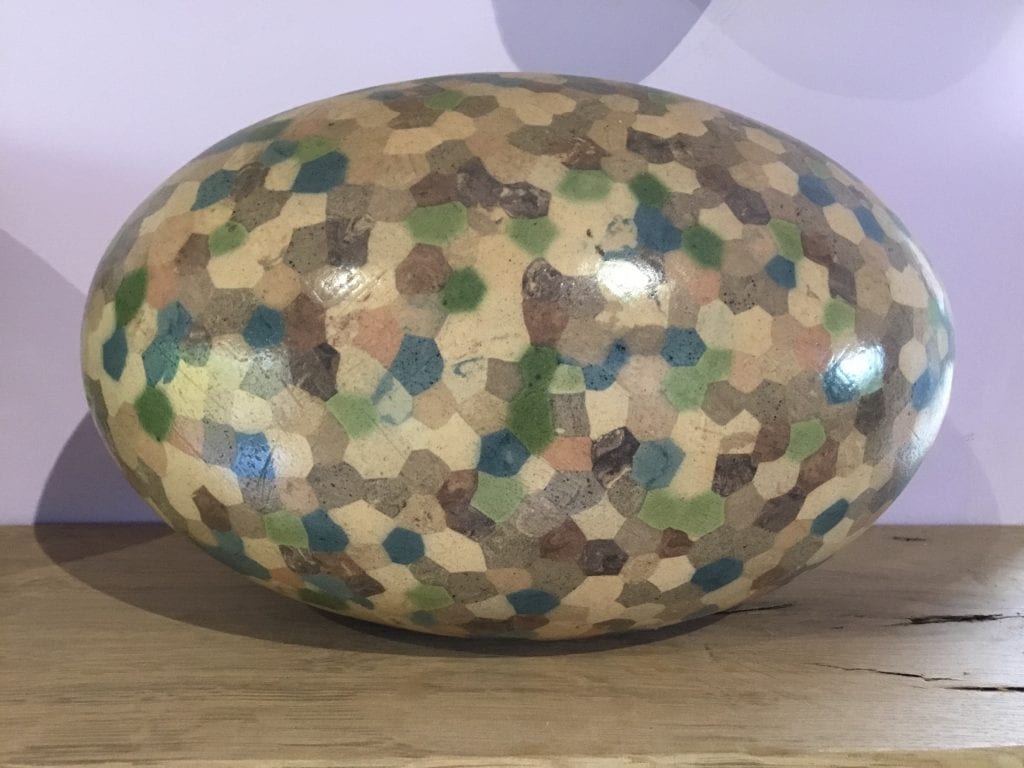 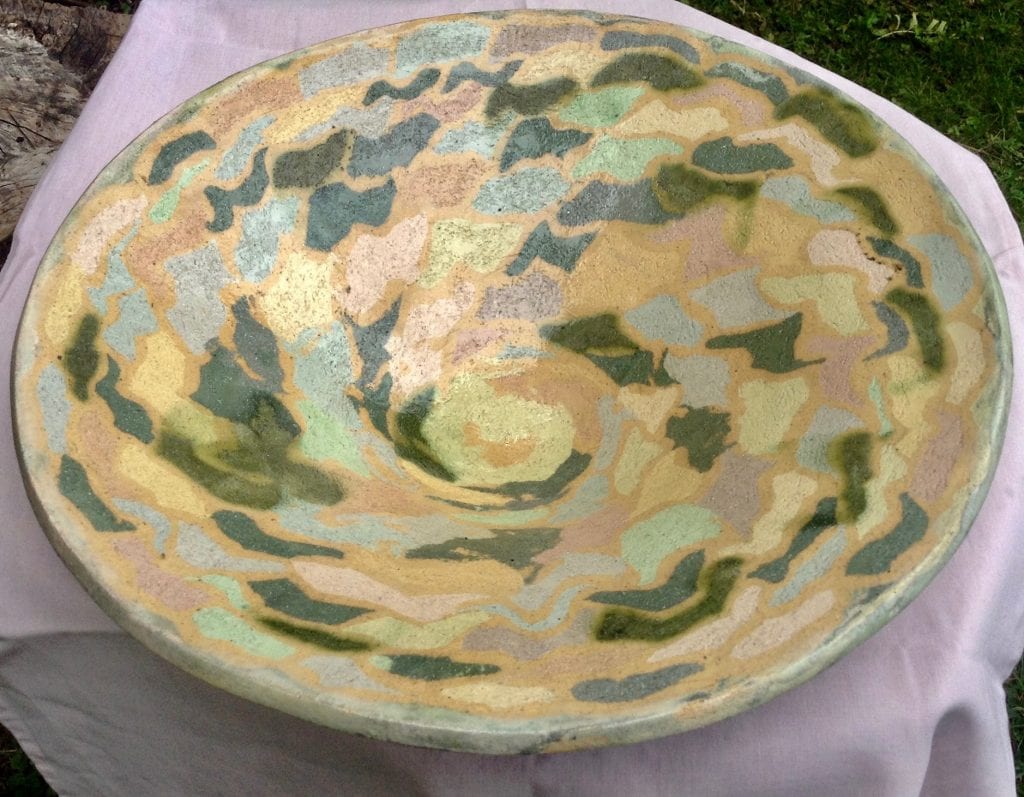 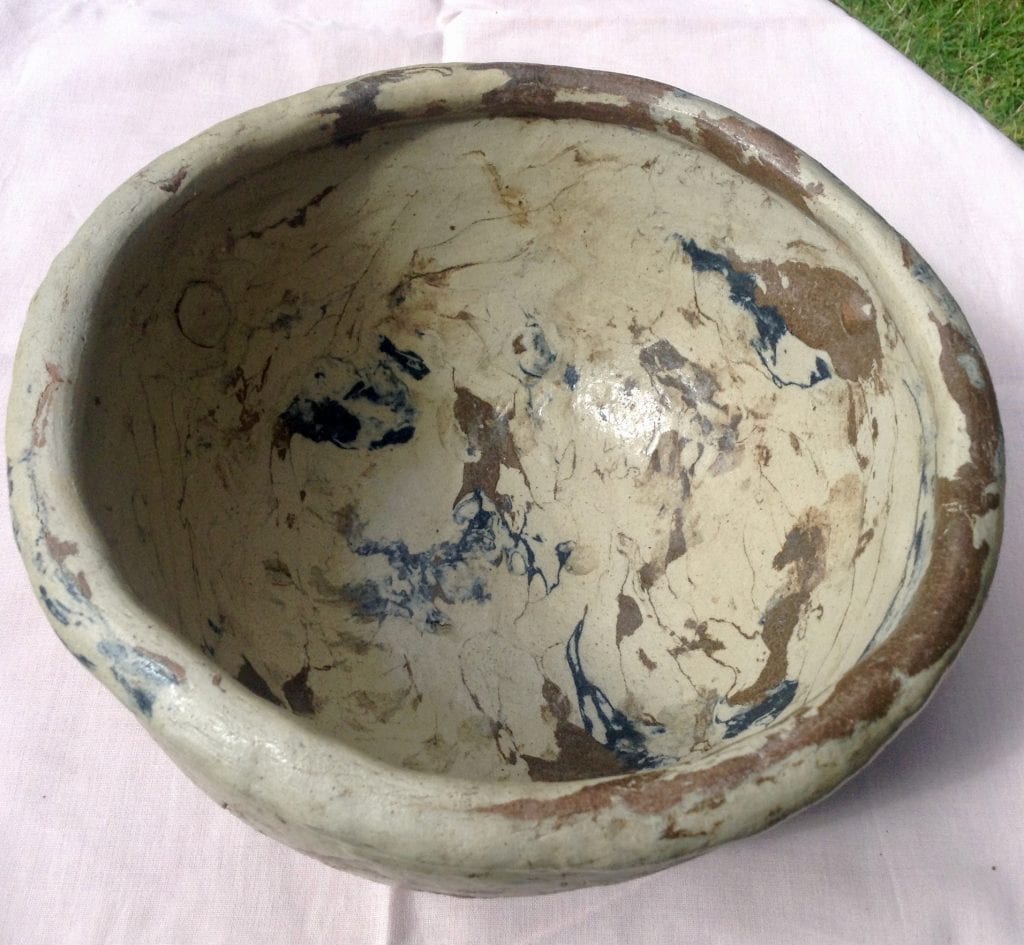 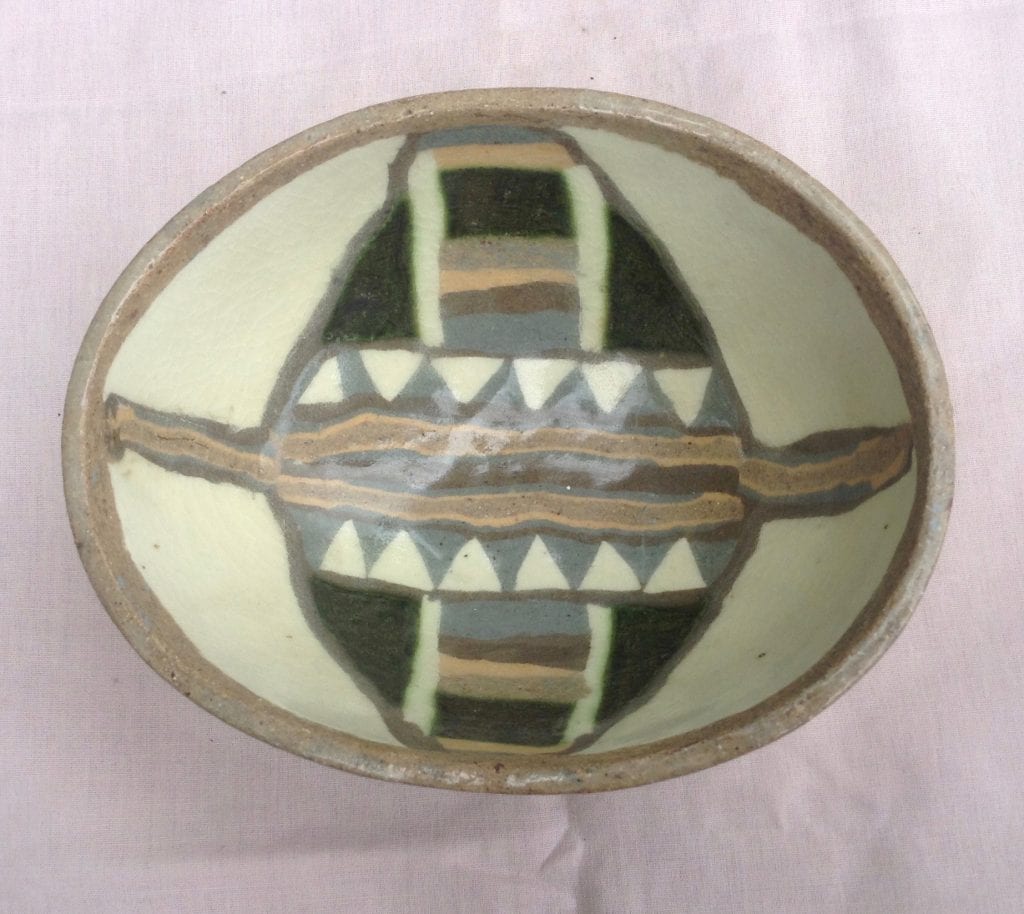 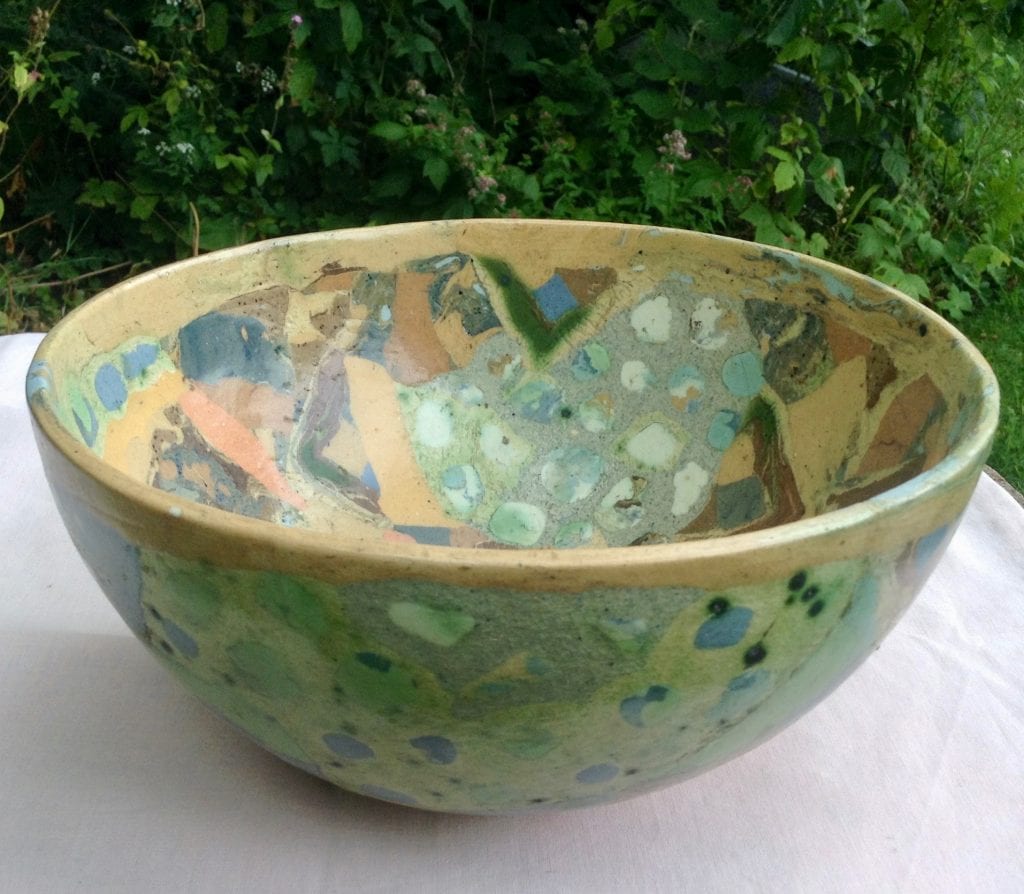 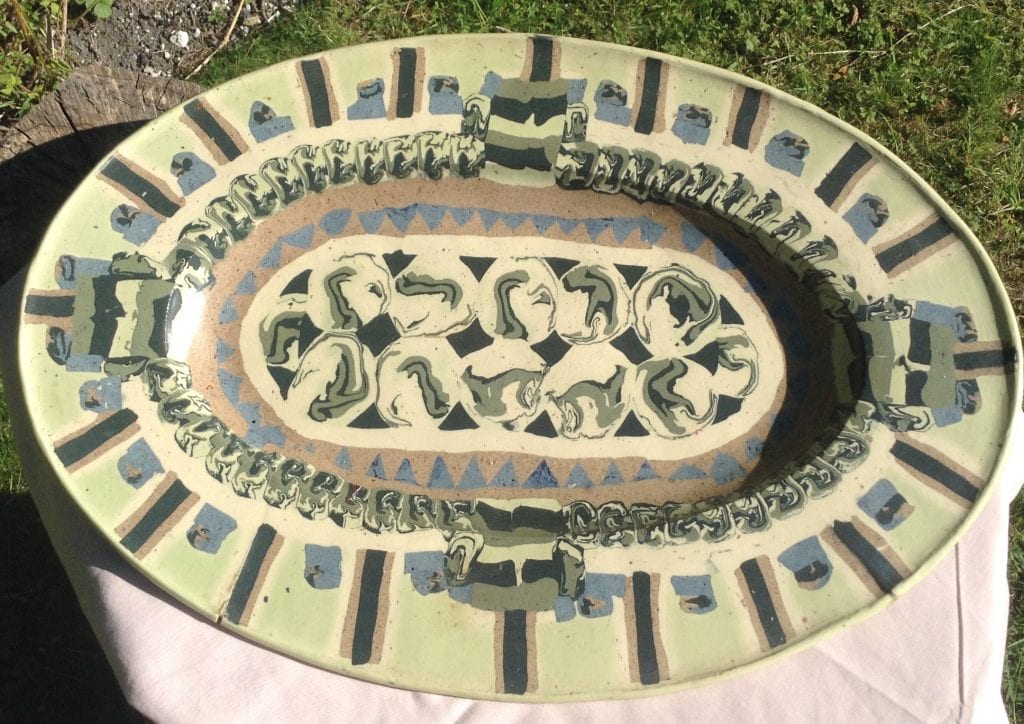 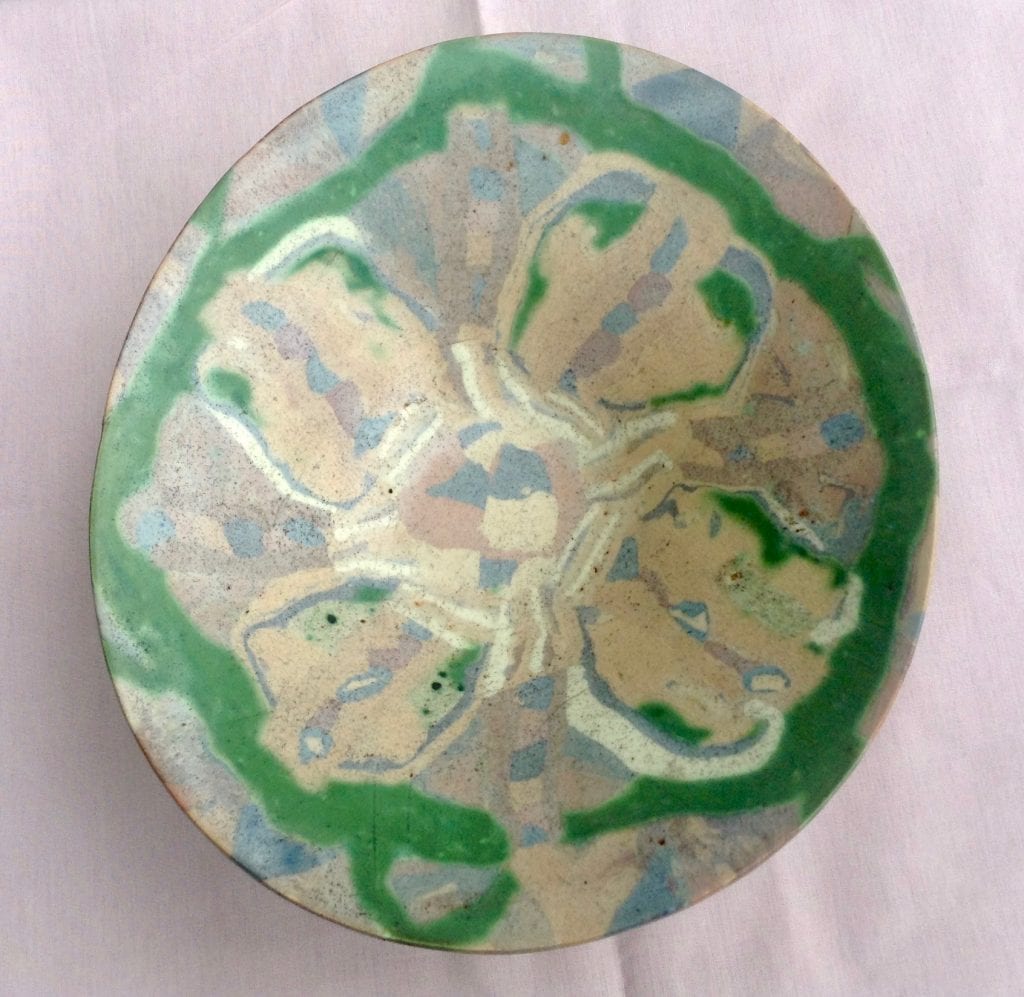 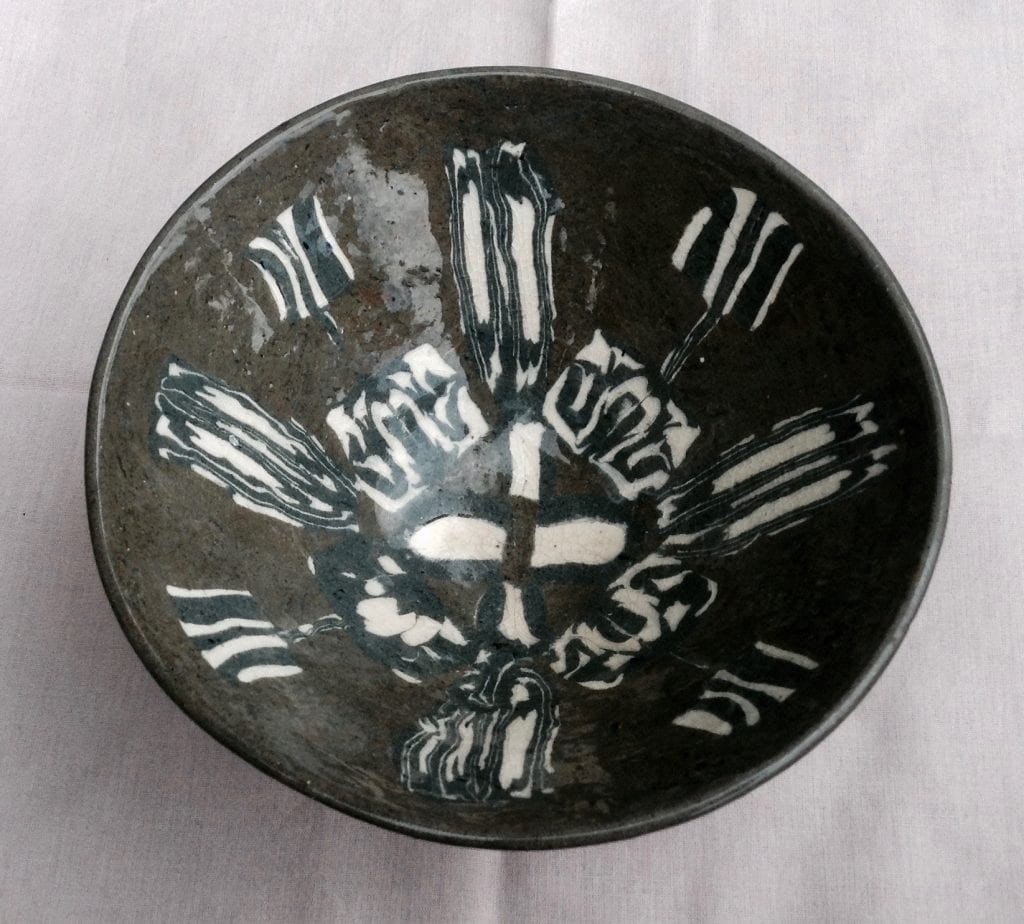 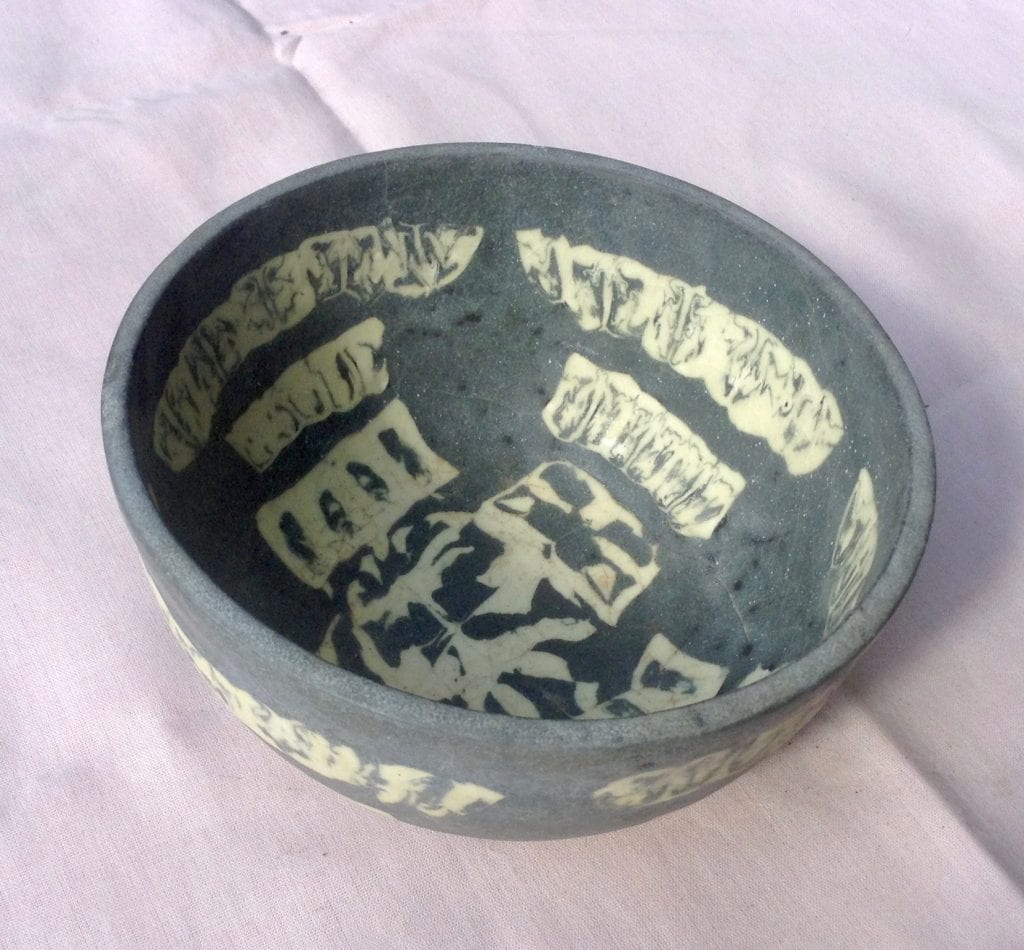 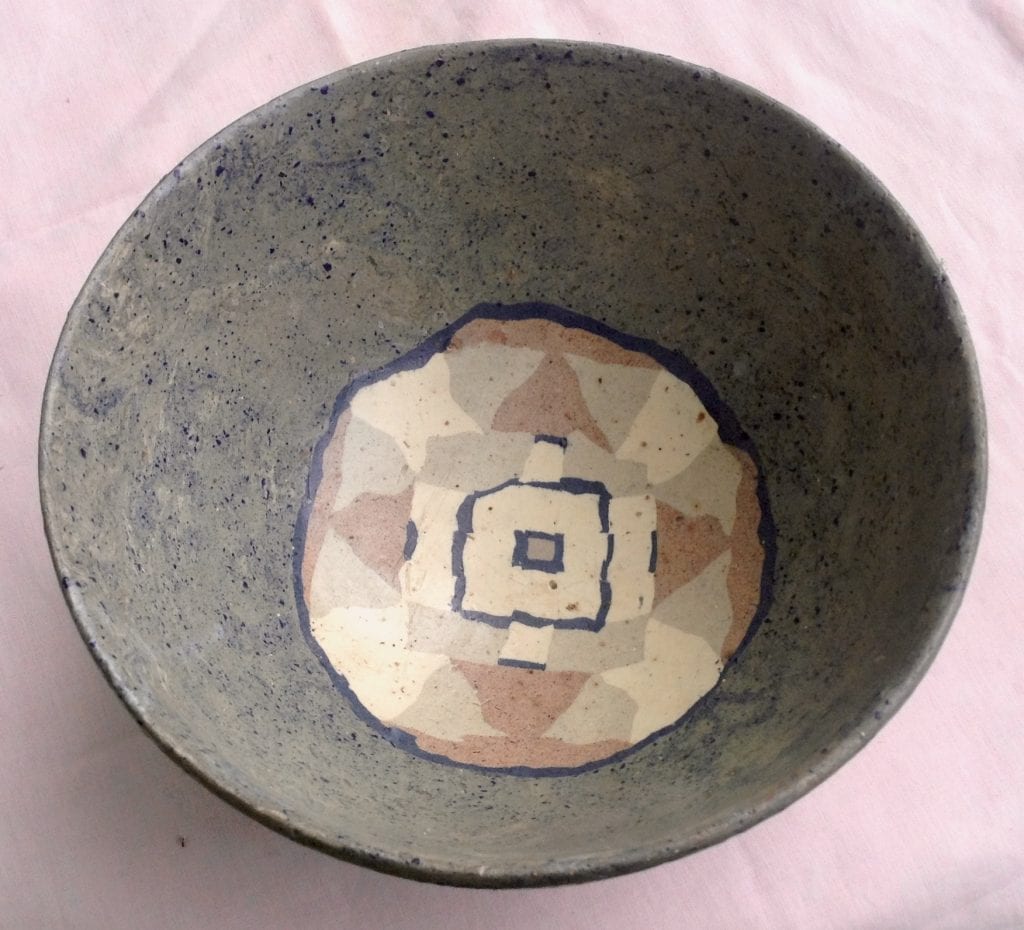 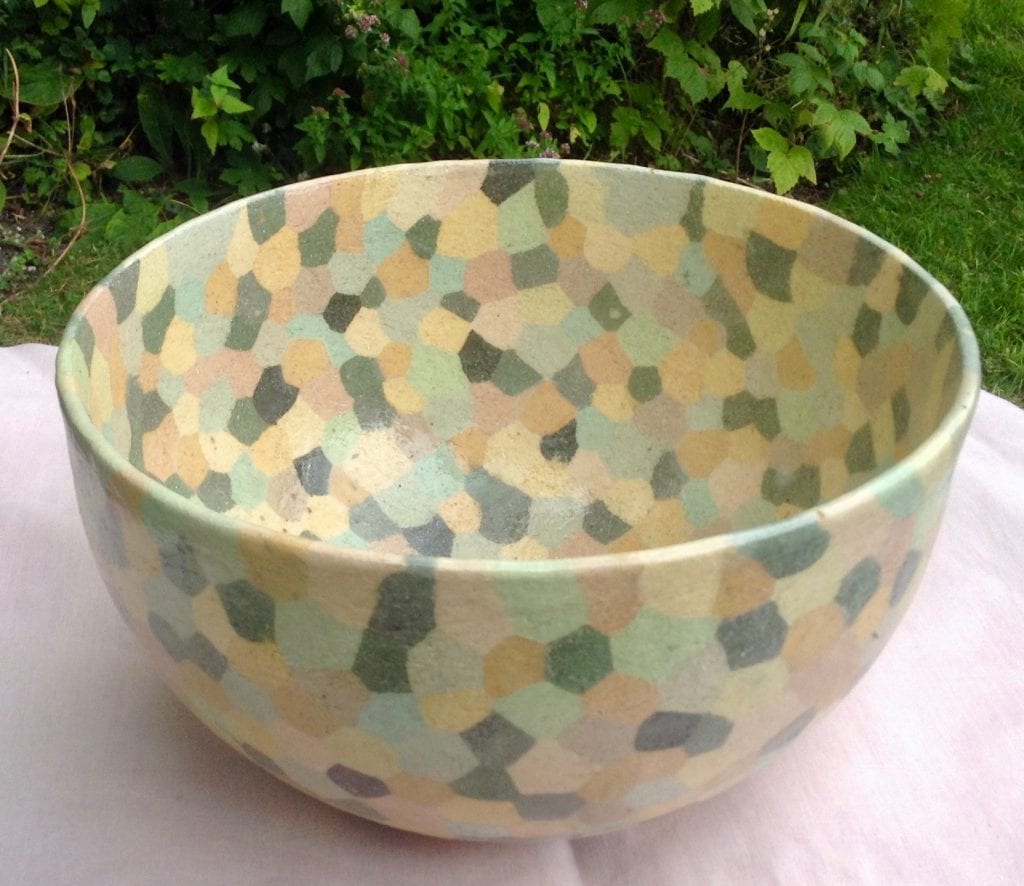 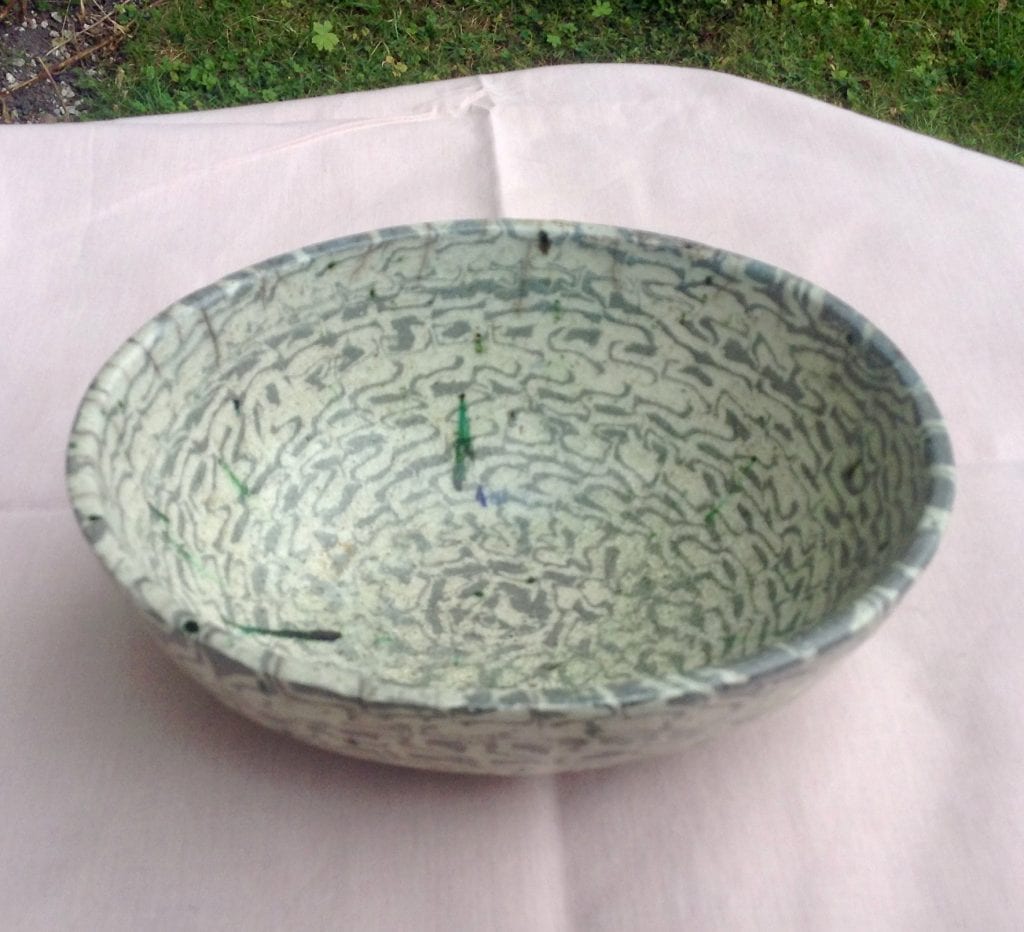 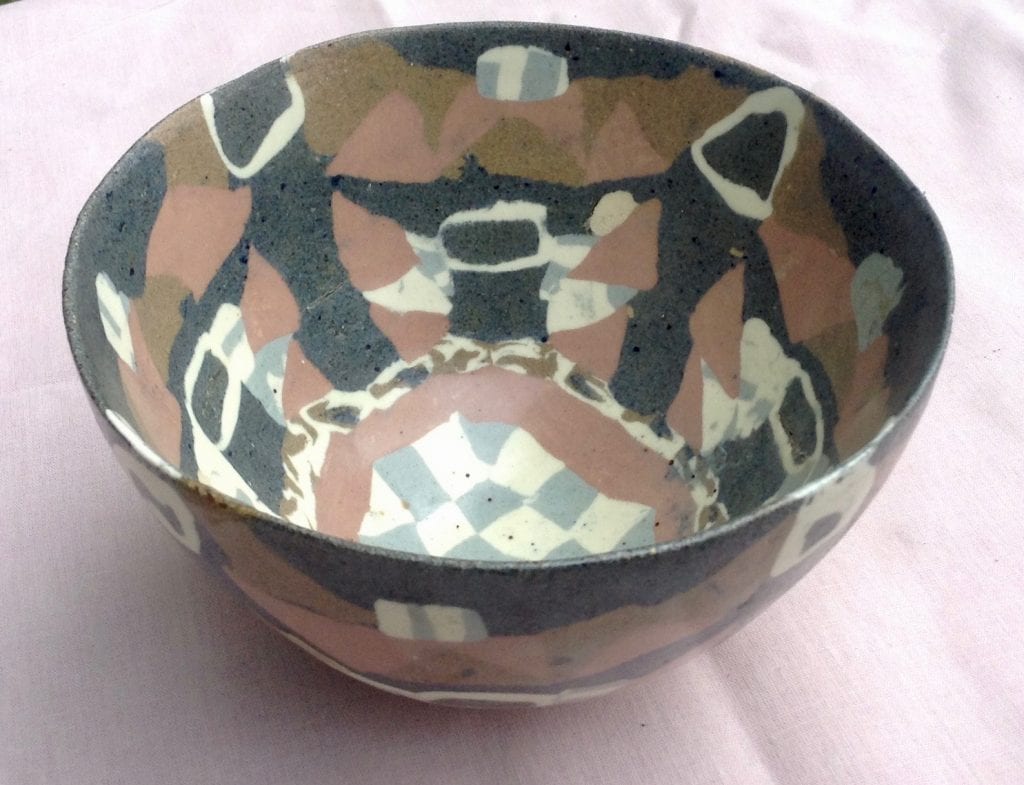 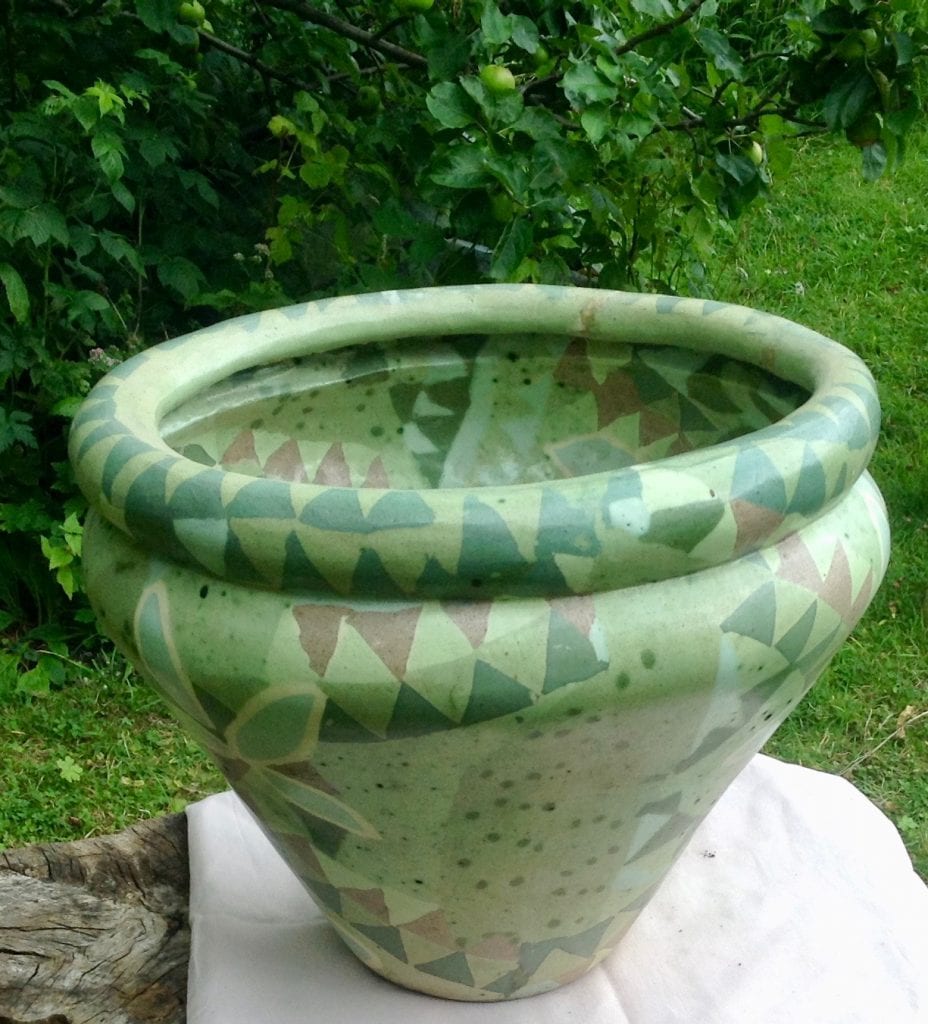 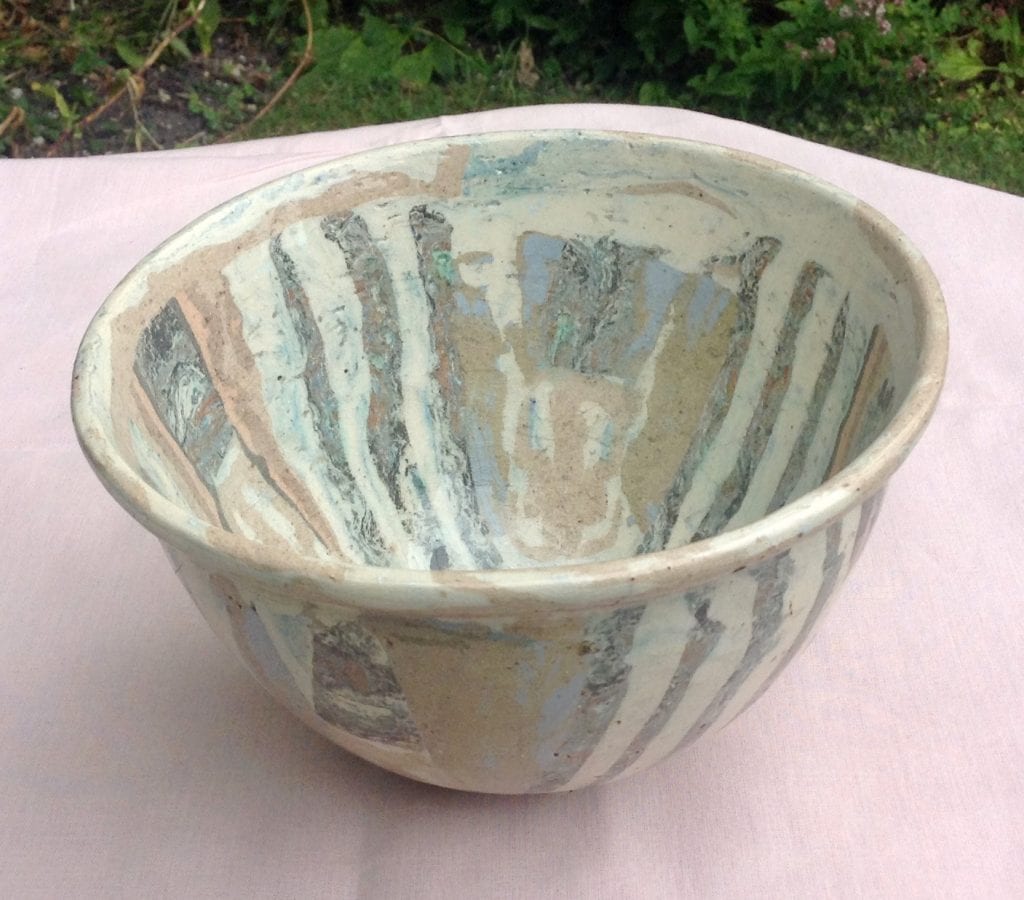 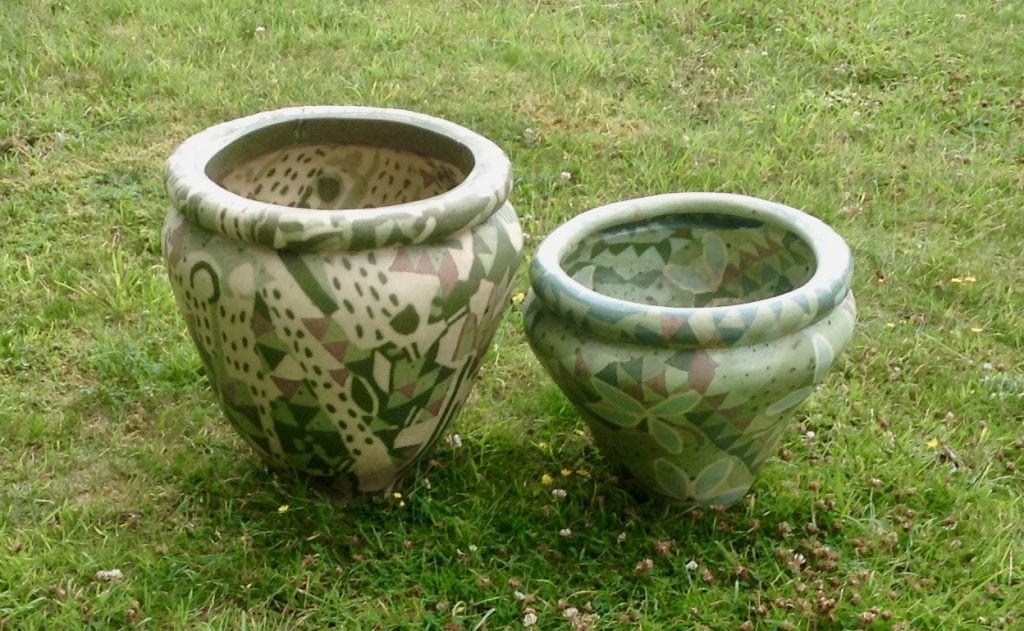