Skip to content
Home » Books » Below the Green Pond

In my first published children’s novel, Below the Green Pond’, Owen, a young boy, falls into a pond and shrinks to the size of the micro-organisms which live there.

As in all my books for children, I try to combine entertainment and instruction, so the various inhabitants of the pond live (and die) as they would in real life, and most of them are known by their scientific names: Daphnia, Dugesia Lugubris, Cristatella, Victorella and Volvox, for example. And Owen’s first underwater friend (Sedilla, the water flea) teaches him – and the readers of the book – a lot of what goes on in the world around us, without most of us being aware of it.

“The Algae are the most important part of our Pond,” explained Sedilla. “They cover nearly the whole surface and give us food and oxygen to breathe. And all by using the light from the Sun. The process is called photosynthesis.”

“Whatever does that mean?” asked Owen, feeling even smaller.

“Really, your ignorance astounds me, “said Sedilla. “Have you no knowledge of Greek?”

“No”, said Owen, his eyes widening. These Pond-creatures were putting him to shame. “Please explain”.

“It’s a very simple Greek word. Photo means light, and synthesis means putting-together. That wasn’t too difficult now, was it?”

When it came out (back in 1982), The Federation of Children’s Book Groups placed it among their ‘Pick of the Year’, which is to say it formed part of a short ‘selection of recommended books for families, tried and tested by children, and voted the best of the year’. The judges wrote that

‘Owen’s underwater world is both beautiful and treacherous. Natural history turned into an exciting adventure. Much enjoyed by a wide age range’.

Here are what reviewers had to say about the book in what are, perhaps, the two most prestigious publications you can think of: The Times Literary Supplement (TLS) and the Times Educational Supplement (TES).

Peter Dance, in the TLS, recalled that he, as a boy, was interested in underwater life:

The woefully short-sighted Owen, an unlikely hero in any other context, falls into a pond under improbable circumstances and shrinks to animalcule size. (A transparently contrived beginning, perhaps, but even Alice had to enter Wonderland somehow). From then on Owen’s adventures among the pond people are credible, vivid and exciting. Befriended by Sedilla the Waterflea he sets out on a journey beset with many dangers and few delights, the kind of journey plotted by Homer, Dante and Bunyan for their heroes and for much the same reason – to prove that mere mortals, for all their shortcomings, may win through against seemingly impossible odds and be chastened or matured by their ordeals.

Predictably the nasties of the pond vastly outnumber the goodies. Owen’s ingenuity is stretched to the limit as he encounters the Giant Transparent Blob, the Hydra Witch, the Copepods, the treacherous Cyclops, and the evil Pond-ghosts – the same bloodthirsty villains I used to stare at wide-eyed through my cheap microscope so many years ago.

I read Below the Green Pond during a transatlantic flight and found it possible to imagine myself again among those animated specks of life I used to bring home in a jam jar from a childhood pond. Thus Jane Waller’s book, whatever her intentions, passes the ultimate test: it is very readable – for every age group.

And this is what Shirley Toulson write in the TES:

Ever since Alice fell down that rabbit hole, and virtually put an end to the straight-forward telling of a fairy tale, children’s writers have been experimenting with other worlds in which their young protagonists could adventure. Sad to say, most of these have been pretty derivative, a reflection on the general paucity of the imagination when confronted with circumstances in which anything is possible.

Jane Waller has got over this predicament in a most original and satisfying way. Her young Owen falls into a completely ordinary pond, where all the laws of biology operate, and in which the food chain is untampered with. Nature remains green in jaw and bubble even if the creatures have the power to discuss their predicaments; and Owen remains an ordinary boy even of he can breathe underwater and has become small enough to live in a jam jar. Like any other boy, he needs friends, and finds one her in Sedilla, the water flea, delicately portrayed by Frank Rodgers.

The little creature has a jolly line in moral discourse, assuring the slightly shocked Owen that living is for fun, and that you can even enjoy the idea of being useful when you are dead and helping to form the mud that feeds the sphagnum moss. Nevertheless, Jane Waller sees to it that the readers experience a real if tiny grief when the flea is taken for dead after an attack by a Hydra. 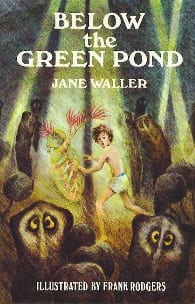 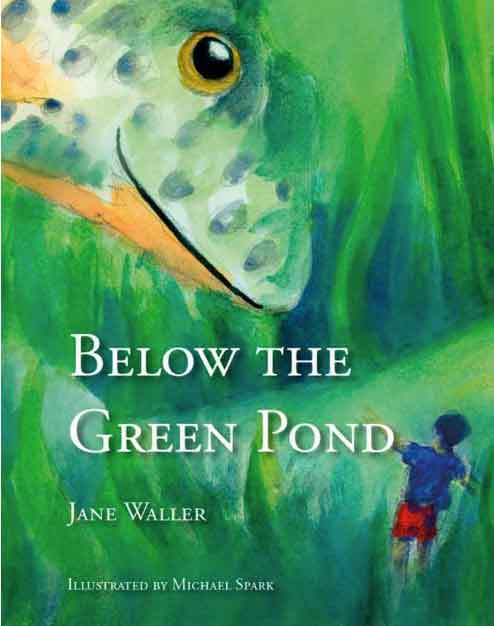 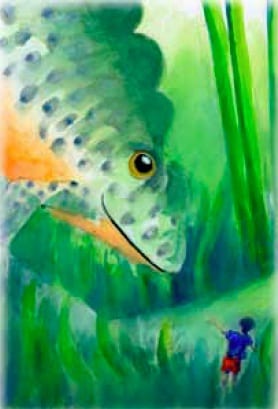 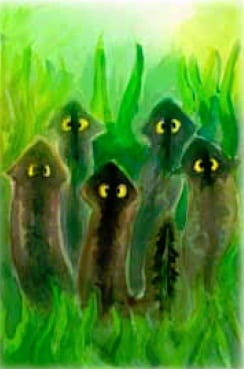