“An environmentally-aware story with an unusual twist and one that will be a source of delight to readers. Peter Phillips receives a mysterious computer disc, rather different from the one he ordered, and realises he can time-travel by using its program.

He journeys to the Cretaceous Age where he’s befriended by two dinosaurs, Jahunda and Segui. He repays their friendship by rescuing them from the after-effects of a giant meteor’s collision with the earth.

Descriptions throughout vividly recreate a prehistoric world and the empathy achieved through Peter’s friendship with the dinosaurs engenders a real appreciation of life 65 million years ago. This is a remarkable book, ambitious but totally accessible, educational but enthralling.”

“This highly imaginative fantasy is coupled with much factual evidence about life in the late Cretaceous Age and provides and exciting read.” (Angela Lepper)

“In my view this book has the best device a children’s book could have, which is a perfect blend of reality and fantasy … All the characters are real and interesting, especially the two boys, and I could not put it down until the very last page.” (Jill Murphy, children’s author).

‘Educational but enthralling’, ‘a perfect blend of reality and fantasy’. I’m glad to see that readers are aware of how I like to go about writing my children’s fiction.

In 1990 (accompanying my husband to a conference in Dublin) I found myself one day in the science library at Trinity College where I came across a book by James Lovelock and Michael Allaby that sparked off ‘Saving the Dinosaurs’.

‘The Great Extinction ‘ (1985) contained the most convincing account I had ever read of how the dinosaurs died out 65 million years ago. Their theory – involving a giant iron meteorite  falling to earth off the Yucatan Peninsula – made complete sense.

Inspired by this, I decided to make it the basis of my second children’s novel. Of course, their book had nothing to say about a young boy holding a special disc that allows him to travel back to the end of the Cretaceous period. But then, they are distinguished scientists, and I was writing fiction; even though much of my book is based on fact. 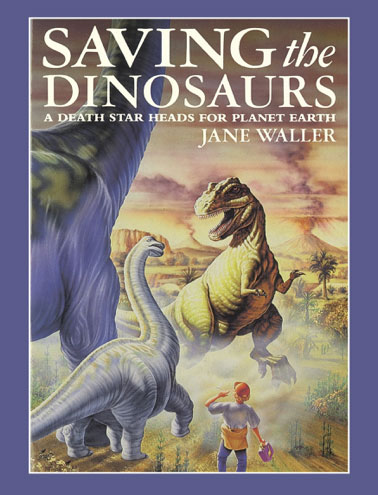