This book is now finished and will be published by authoright, due out June 2019.

It takes place in Buckinghamshire, Oxfordshire – and a Boarding school in South Croydon ... complete with a ‘flasher’, and has many black and white Brownie Box Camera pics, drawings and paintings.

I begin this book as a 4-year old, with the vocabulary, grammar, feelings and memories of that age. With each chapter, as I grow older, the language, thoughts and philosophy gradually mature – but not the bad spelling - and the book ends when I am eighteen, become a Beatnik and go to Art College.

The book starts in 1948 and ends in 1962 encompassing the 1950's. The adult speech which goes through the book in italics, is based on my Mother’s diaries, which I use to jog my own memories back in time. From 1955 onwards, I have my own diaries. In one section I include material from my Grandmother’s diary.

Here are a few extracts from the start of the book:

Our Vicar, the Reverent White from Ellesborough church, comes to tea because he likes Mummy’s home-made cake, and he can make the tiny people speak to him right out of the fire-place chimney, or the other end of the room, because he’s Holy, so they obey. I wish I could make them talk to me. Lynda says ‘The Reverent White is a ‘ventrillyquist’; that’s why he can.’

Edmund asks Mummy what a ‘ventrillyquist’ is, and she tries to explain:

‘Well, if he can throw his voice like that,’ Edmund says, ‘why doesn’t he make his congregation speak back to him when he’s in the pulpit?’

‘What a wicked thought, Edmund,’ Mummy laughs ... ‘but I did hear that once he scared poor Mrs Spittles rigid. They were walking through the graveyard, when the Reverend White suddenly made the answer to one of her questions come right out of a grave. Mrs Spittles’ hair stood on end and she turned a nasty colour, so the Reverend White thought he’d better not do it again, as it was far too ungodly.’

The cuckoo is a ‘ventrillyquist’, as he can make his voice come way over from the misty valley beyond the green hill. ‘Cuckoo’ he calls so clear through the mist again and again. He never comes nearer because he doesn’t want to be seen – like the tiny people; but I love him best of all.

Geoffrey is sometimes mean. He keeps putting big spiders in my bed. He thinks this is really funny. It’s because we call him a ‘wizzle’ as he cries a lot. At night I can feel a crawliness on me, it makes me cry, and I think the spiders are going to bite me. And inside my mind, they’re huger than they really are.

‘Petrol rationing has ended!’ announces Daddy. ‘Good! I’ll be able to awaken my sleeping car.’ Geoffrey is terribly excited, so Daddy takes him to where it lives in the thatched garage. We find a hen’s nest on the back seat, and two of its windows smashed. Its cloth roof all moulded away like Horace our tortoise, when he died being buried and moulded in the ground. 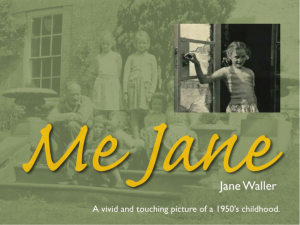 ‘I’ll have to save up to repair it and buy four new tyres before it can come off its chocks.’

My Dancer drawings from my diary aged 8

The Family on holiday

But then a most terrible thing happens:

Vanny is too young … and she’s very disobedient. When no-one is looking, she creeps out to the bees to see why she’s not allowed to go out to the bees. And the whole hive fly down on her in a great cloud, swarming round and round, buzzing and buzzing her. They all settle on her until she’s covered from head to foot with bees and looks completely brown. Then they start to sting her to death for taking all their honey. Gerda hears her screaming and rushes out and flings a mac over her and carries her back inside. Vanny is crying away, then goes very quiet. Immediately Mummy rings up her younger brother, Uncle Peter, who’s a vet. He says, ‘Plunge her into a bath with ‘Blue-bag’ in it - Blue-bag soda for making sheets go white, is the opposite of a bee-sting and will neutralize it. Then get someone to rush her to hospital straight away.’

Daddy is at the Office with Daimler, so Mummy rings Mrs Bartlett down the road who can drive a car. She takes Vanessa off like fury to the Royal Bucks Hospital, while we all hold our breaths. She’s so badly stung, we don’t know whether she’ll live or die ... as she’s only little. Mummy is crying, as Vanessa is called ‘under observation’. We’ve all gone quiet and still, waiting for Daddy to come back. It’s a terrible day. When he does, he hangs his head like a wolf again, because he says it’s all his fault. Now we are all waiting, and we are all crying.

Then Vanny comes home again, very floppy and sleepy. Mummy and Gerda spend the evening picking hundreds of bee-stings out of her body. Mummy is in the middle of thanking Gerda for saving Vanessa’s life, when suddenly she realizes Gerda, too, has been stung quite badly, all on her head and arms - and bee-stings have to be pulled out even between the hairs on her head.

‘I didn’t feel a thing, I promise. I only thought of rescuing the child.’

Mummy and Gerda cry and hug one another after that, and they’ve become very close friends.

‘What happens to all the bee-sting juice inside Vanny’s body, Daddy,’ I ask, later.

‘I think no sting will ever affect her again after this, as she’ll be ‘immune’.

Then we all go to bed.

Mummy and Daddy think we should all go away for a holiday when Vanessa is a little better. They’ve booked ‘The Houseboat’ that floats on the sea at Studland Bay. Edmund’s back from Normandale next day, so we whisk him straight off with us.

And it is the most loveliest holiday. The Houseboat really is a house that has a boat underneath. When it’s being a boat, it rocks on the sea to and fro. Then suddenly it sits down on the sand Thump becoming a house again when the tide goes out, so it’s name is perfectly right for it. At night the wind blows strange sea-tunes in its metal chimney over the cooker, and the sea rocks and rocks, and the seagulls cry and cry.

Daddy shows us how to dig for cockles just when the tide is coming in. Geoffrey is very good at this – probably because he loves eating cockles – he’s added them to his Favourite List of Foods.

When Granny Waller comes down to join us for a few days, she’s far too late: the sea has already started tumbling in again for the night. What shall we do? It’s a terrible worry. But Daddy thinks of a grand idea: he lifts Granny up, places her carefully in the trailer so she won’t get wet, and we all push her through the foam to Houseboat, with all the tide rushing in around us - except for Geoffrey, who is still doing cockles.

The boys have woollen swim-suits which go a bit baggy once they get wet. But Mummy has thought of this happening, and stops their swimming trunks landing around their feet by giving them strong ‘Boy Scout Snake-Belts’ to keep them up. Our swim-suits are cleverer - a kind of honey-comb elastic stuff, so they don’t shrink at all, because they’re kept up by our necks.

Daddy doesn’t swim very well, and can only go along on his back doing a kind of strange back-stroke like a great turtle swimming along. He shapes his hands into paddles and scoops up the water to propel himself. He goes very slowly, laying his head back fearlessly on the surface of the sea.

And then the wisps of hair, which he always combs over his balding head, shoot free and drift alongside like strands of sea-weed, which makes us all laugh. But the trouble is, because he’s on his back, he never sees exactly where he’s going, and sometimes forgets, because he’s thinking about something else - like a bit of roofing or drain-pipe to do, so he drifts out to sea.

‘Quick! Daddy’s floating away!’ Mummy shrieks from the shore, and Gerda and Edmund have to swim out to tow him back by his toes.

We go on an expedition to see ‘Corfe Castle’, as we all love exploring castles. We think the whole of England should be covered with them for people to live in. Knights could ride from one to the other, wearing the armour in Mummy’s Brass Rubbing Cabinet. Edmund names us: he will be Sir Edmund De Valois; Geoffrey, Prince Geffroy De Castille-Soap; Lynda will be Queen Lynda-Love; me, Lady Jane Ashton-De-Valois, and Vanessa, Princess Vanny. Us girls must grow our hair very long, Edmund says, ‘so we’ll look like Repunzel.’ I don’t know who Repunzel is, but it’s a very good word, which sounds like a kind of bouncy bath-sponge. We will live in our castles with our long hair, and eat cockles every day for lunch.

This is the time when Edmund died. And this is how that happened:

We went to the Nut Wood. Edmund climbed right up a tall tree to reach the pigeon’s nest. He wanted to get some eggs for supper. But there was a CRACK! And he fell down THUMP onto the ground. He lay completely still. We all stood around him, waiting to see if he was dead. He had gone all white like the inside of the chalk hill, and his eyes were closed up. After a bit, there was a strange rattling - like the baby owls in the chimney - coming from inside his throat. We all stood looking on in Horrid Fascination. But then he came alive again and wasn’t dead at all, so we were quite pleased. He sat up and said in a croaky voice, ‘I think I’ve been winded. You’re not to tell Mummy, or she’ll be very worried. You must all promise.’ Just beside him, were all the eggs he’d got smashed to pieces, like a terrible omelette on the ground.

‘Your 7-year old School report is still very weird, Janie … now it says: ”Jane has good control with writing, but will still do peculiar things if left on her own, as she seems to find it not only just as easy to write up side down, as from the end of a word to the beginning …”

I hope you don’t begin speaking like that to us, Janie, or none of us will understand you,’ Mummy laughs … but I say that I’m only experymenting.

(But the moment we finished restoring it to its former Georgian glory – after 7 years of really hard work from the whole family - the then Bucks County Council took all the land from the front, back, and down the side for road-widening, destroying the walled kitchen garden, the walled orchard, the James1st Mulberry tree, The ‘Ruin’ and the stables and coach-yard. (They gave my father £2 compensation for fighting against it, as they said “It improved his frontage.”)

My father was made very ill after that.

Sadly, this property would have made a wonderful estate for people to enjoy today right in the centre of Aylesbury.